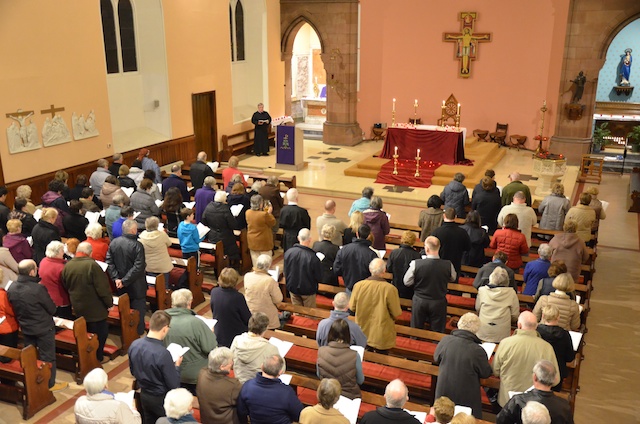 On Monday 25th February, the start of a week-long mission in the parish began with a Healing Service led by Fr Kieran and Fr Mulligan from the nearby St Mary’s Monastery at Kinnoull.

The Oil of Healing was carried in procession at the start of the service which was attended by around 200 parishioners.

Fr Kieran summed up the ‘four attitudes’ which prevent us from recognising God’s love in ourselves and in others: envy; resentment; gossip and selfishness. “No matter how we feel about others,” said Fr Kieran, “God is calling us to bring the Good News to them.”

Treating others with dignity and respect is what Jesus showed us when he sought out Bartimaeus among the crowds to heal him of his blindness. ‘What is it that you want?’, Jesus asked him. The man’s cry for help had been heard. Jesus gave him the sight he had asked for saying, ‘Your faith has healed you.’

Christ is asking each of us – what would you like me to do for you?

In our own lives, among those we know, people are crying out for forgiveness or a better understanding. We can bring these people nearer to Christ if our anger and spite, or the wounds of many years, are healed.

The hymns were led by the choir, under the direction of Miss Susan Cassidy. 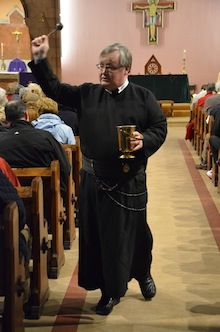 Pupils from the St John’s Academy and Kilgraston School helped the Redemptorists on the second day of their mission to the parishioners of St John’s parish, Perth. Ruaridh and Harris led the procession with the parish’s oldest baptismal register, dating from 1831, and water to be blessed for the baptismal font.

As he sprinkled the Holy Water on the congregation, Fr Kieran Brady asked parents to make a sign of the cross on their children’s forehead, in blessing.

Welcoming the children and their families, Fr Kieran reminded them that they were the most important part of God’s creation. At our baptism we are called to be part of his Church and the day of our baptism was the MOST important day of our lives.

He recalled Pope John XXIII’s words, that even after his ordination as priest and installation as Pope, baptism remain the single most special day of his life because “that was the day I was called by the Father to make a difference in the world.”

Samuel’s calling was acted out by Fergus and Grace reminding us of the importance of recognising what God wants us to do. Eli two sons didn’t turn out the way he wanted, they stopped practicing their faith and had become a source of shame and scandal for him. But God had chosen this old man to influence the life of Samuel.

Simeon too played an important part in that ‘little golden thread of faith’ being passed on from mother to son, father to daughter, grandparent to grandchild. In the Gospel, the old man’s words to Mary also warned of the pain that she would feel as the mother of Jesus, ‘a sword will pierce your heart.’

John the Baptist transformed the life of the young Jesus – so too in all our families we can think of someone who transformed our lives; who showed us the person we could become; who passed on the faith to us. No family is perfect but there are many examples of Holy families who make time with their children, speaking about the things that matter. You loved them into being and gave them the faith. God knows what you have done for them and at times he calls us to be like the father of the Prodigal Son – who wants his child no matter what they have done. 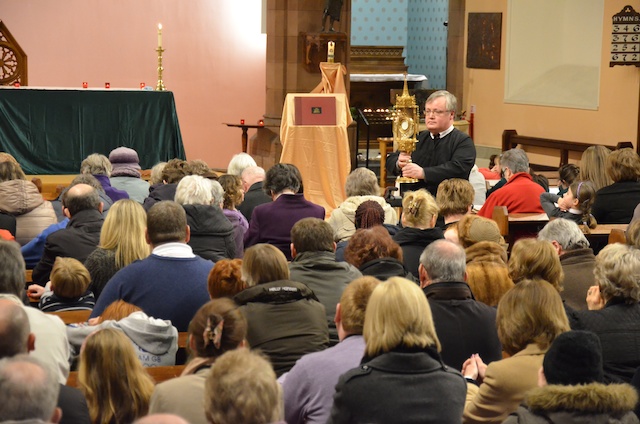 The Blessed Sacrament – The Real Presence

There are so many distractions in life, of things that do not matter. We need to make time for Christ in our lives.

Emphasising the importance of these first steps in the faith, the child gathered in front of the altar to lead the singing of ‘Walk With Me O My Lord.”

It was the turn of the Perth Catholic Youth Project to help out during the Parish Mission on Wednesday evening. Members of the 3GY Youth Group stepped forward to help Fr Kieran in a moving recreation of the scene in the Upper Room at the Lord’s Last Supper.

In setting the scene, Fr Kieran explained that it would have been the youngest members of the family who helped prepare the table – often asking their parents, who is the empty seat for, or where is our Messiah?

Youth Worker, Gordon Allan, read St Paul’s account to the Corinithians where Jesus gave the apostles the bread and wine saying, ‘this is my body… this is my blood.’

Fr Ronnie McAinsh was preaching in his home parish for the first time in 47 years of priestly service. He told a rapt congregation that the cross around his neck, his Mission Cross, was a constant reminder of God’s love.

He spoke of how Last Wills and Testaments can be sources of joy and sorrow. What Jesus’ left for us is not just a little token of affection, but it was His body, His blood, – all of Him. The gift of the Eucharist is his Good Friday, the Gift of Himself and we are forever strengthened by His love.

The Eucharist means sharing; Jesus giving up his life for us – but what does it really mean for us?

Fr Ronnie retold the story of Fr Maximillian Kolbe, who, in Auschwitz, offered himself in the place of a family man, with a wife and five children, who had been sentenced to death. Kolbe’s act, to all, would be viewed as an unbelievable act of love and goodness; laying down his own life for another.

When the man whose life had been spared, now a great grandfather, met Pope John Paul II he said, “it is difficult to understand that a man has laid down his life so that i may have mine.”

“But is this what Jesus did too,” said Fr Ronnie, [nbsp]”not just for one but for every single person in the world. He died so that we may live. Our strength must come from Communion where we come together in God’s love and we must not take the gift of the Eucharist for granted as it is Jesus laying down his life for us.

“In our lives the Eucharist is not a luxury it is an essential.”

In Christ’s own words, ‘unless you eat of my flesh and drink of my blood, you will not have life within you.’

A Reflection on Prayer

Mass for the Sick 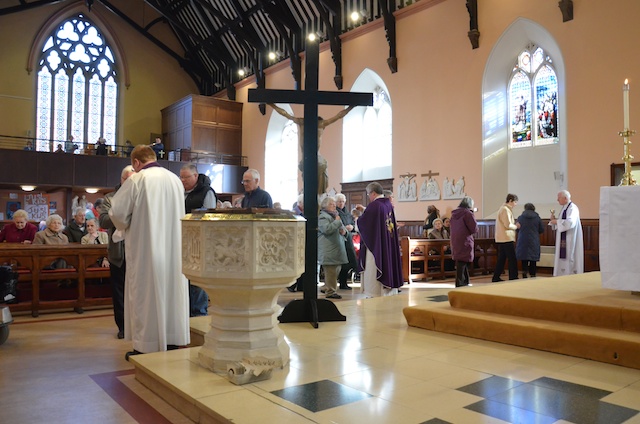 A Healing Service in St John’s 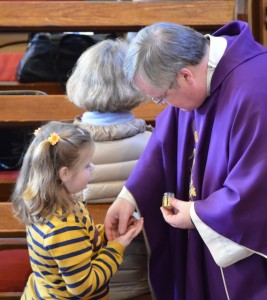 During Mass for the Sick at noon on Friday, Fr Kieran summed up the words of Pope John Paul II, saying, “Those of you who are sick are in fact the backbone of the parish. Many of you have worked so hard through the years in many groups and societies, and indeed throughout your life. But he added that the most important time of your life is right now, when you are close to God and you can pray for us. The people of the Church should be asking for your prayer – so we ask that prayer from you and we also thank you for all that you have given to the Church. We ask you to continue to do so in your sickness, by praying for us and we will pray for you.”

During the Mass Fr Gerry, Fr Kieran carried the Oil of the Sick to the people, anointing them, as the choir sang the hymn, ‘Lay Your Hands Gently Upon Us’.

At the Annunciation, God put his trust in human hands. In the last line of that Gospel reading, scripture says, ‘and then the Angel left her.’ We have an image of a young Jewish girl, about the age of 16 left trusting, but without proof. With those around her so incredulous and unbelieving, she[nbsp]had[nbsp]to believe when others didn’t. We might wonder who would place the life of their child in that same shaky place in the world today.

Today, Mary is a model of how we can bear Christ to the world. We are called to be bearers of Hope and Good News to the world. Mary was one of us. She had our feelings – proud of her son as he grew, not always understanding what he was doing, watching him suffer on the cross. Joseph died early in Jesus’ life, Mary knew what it was to be a single mother and a refugee.

St Augustine wrote that Mary was justly celebrated by the Church as Mother of God but should be even more so as a Disciple of the Lord. Mary’s great dignity in the face of injustice is mirrored today when we see the weeping women of the Middle East grieving for their children – but not only in far off biblical lands.

Fr Kieran recalled the mother of Stephen Lawrence, standing with her own mother, and holding a candle and picture of Our Lady, as she faced the media to call for justice. “It helps to think of the face of our Lady as real flesh and not just a plaster cast saint”.

Mary understood the scriptures and made their word her home. Our Church and our Faith are built on the Word of God – so to follow in the footsteps of Jesus look to Mary – she lived these scriptures.