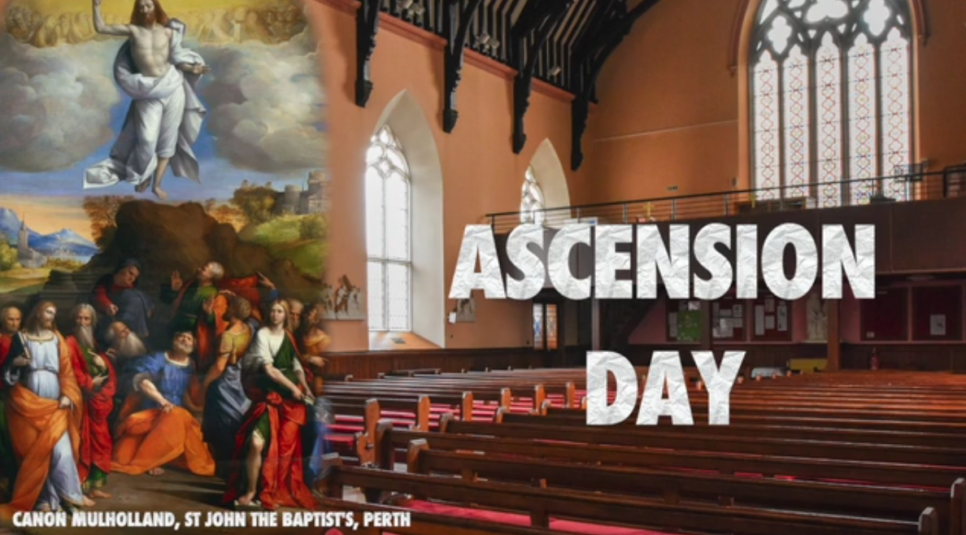 A message for Ascension Day from Canon Mulholland

St Augustine called the Ascension ‘the crown of all Christian feasts.’ Had you lived a good many centuries ago, Ascension Day would have been a public holiday.

Listen to these words from the Holy Gospel according to St John:

Jesus said to his disciples: “Let not your hearts be troubled. Believe in God; believe also in me. In my Father’s house are many rooms. If it were not so, would I have told you that I go to prepare a place for you? And if I go and prepare a place for you, I will come again and will take you to myself, that where I am you may be also. And you know the way to where I am going.” Thomas said to him, “Lord, we do not know where you are going. How can we know the way?” Jesus said to him, “I am the way, and the truth, and the life. No one comes to the Father except through me. If you had known me, you would have known my Father also. From now on you do know him and have seen him.”

One way or another there’s a good deal of uncertainty around at the moment. A lot us are feeling anxious about what the future may hold, and it’s difficult to imagine life returning to normality again.

It’s that kind of fear about what the future holds that Jesus addresses when He invites His followers not to let their hearts be troubled. He’s preparing them for what the future will bring as He speaks of His departure to prepare a place in God’s eternal kingdom for all those who follow Him, and so He calls us to see that in the Father’s House nothing will be lost.

These words are given to offer immediate reassurance to his company of disciples. Though Jesus is going away it will be for their benefit; he won’t forget them, he won’t abandon them. They are words that reach out to each of us too, and they remind us that we are in the Father’s hands for eternity.

When the disciple Thomas challenges Jesus about what he means, the reply he receives shows us that Jesus provides the way to heaven because he himself is heaven come down to earth. “I am the Way,” he says, “if you want to get to the Father’s house, you must come with me.” To be in the company of Jesus is to be standing already in the courts of heaven with God’s angels ascending and descending. With him we see what the life of the Father’s House is like, and through the Holy Spirit we can begin to share that life now.

God’s eternity breaks into our lives now. Eternity is not just what happens at the end of time, after we are dead. It is our sharing in the life of the Lord. Every time we know ourselves to be forgiven and forgiving, to be loved and to love we have put a foot into eternity. Every time we reach out in concern and care to those around us we are telling the world we are living in the Father’s house even now. Every time we practice hope, every time we place ourselves into God’s hands, and almost despite ourselves, trust in his mercy we are living as those for whom the kingdom is coming on earth as it is in heaven.

At the end of John Drinkwater’s play about the life and the death of the great American President, Abraham Lincoln, an actor comes to the front of the stage after Lincoln’s assassination and says, ‘Now he belongs to the ages’. That is true of all the great men and women of the past: now they belong to the ages. But of this man Jesus we have to put it the other way round: ‘Now the ages belong to him’.